The masonry arch, one of mans’ oldest architectural forms, is defined as a rigid span curving upward between two points of support. The arch appears in a wide variety of structures ranging from the purely decorative triumphal arch to the masonry arch bridge where it sustains great loads.

The round arch, Figure 1, was used by the early Chinese in all types of buildings. In ancient Egypt, this arch and others were used in nonceremonial structures such as engineering works and private dwellings. The Babylonians, on the other hand, used their arches in temples, palaces, and tombs. The Romans used the arch freely in their secular structures, as in the Colosseum, and in their engineering works like the aqueduct, but in their temples they followed the Greek style with the horizontal entablature.

Many forms of the arch have been developed during the centuries of its use, ranging from the flat or jack arch through the segmental, circular, parabolic to the pointed Gothic. Used freely in the great cathedrals of Europe, the Gothic or pointed arch had a structural use more important than the ornamental effect, as it minimized the outward thrust, making possible the firmness and stability combined with the lofty and spacious interior characteristic of the Gothic cathedral.

Two distinct types of arches have been recognized based on span, rise, and loading. The more common concrete masonry arch is the minor arch where maximum span is limited to about 6 feet (1.8 m) with a rise-to-span ratio not exceeding 0.15, and carrying loads up to 1500 lb per foot of span (21,891 N/m). The second type of arch is the major arch where span, rise, and loading may exceed those of the minor. Illustrations of both types of arches are shown in Figure 1. However, the design section of this TEK discusses only minor arches. 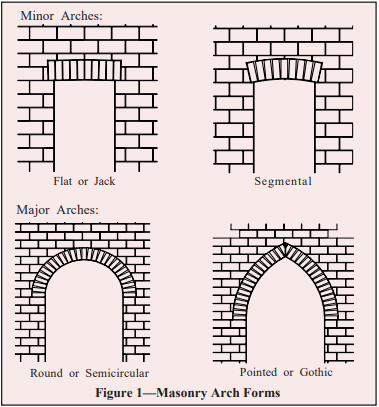 Fixed masonry arches are statically indeterminate to the third degree, that is, they have three reaction components or force paths that could be eliminated without adversely effecting their stability. This redundancy is a hidden asset of masonry; the tendency for “arching action” provides a masonry wall with resistance to progressive type failure. When a hole is caused suddenly in a masonry wall, an arch is created over the opening and the wall continues to carry load rather than fall down.

This redundancy of the masonry arch is, however, a nuisance when one considers design. Because the masonry arch is statically indeterminate, arches in building walls are generally designed or analyzed by approximate methods; the degree of exactness of the design procedure depends upon the size (span & rise) of the arch. Minor arches with spans of up to 6 feet (1.8 m) and rise-to-span ratios not exceeding 0.15 may be satisfactorily designed by the hypothesis of least crown thrust first proposed by Mosely in 1837. Major arches may be designed by considering them as essentially thick curved elastic beams. Many methods of elastic analysis have been developed; however, in most instances the application is complicated and time consuming. And, it is still an approximate analysis since the equations are developed assuming that deformations within the arch are small enough that the stresses are not affected if these deformations are ignored. This is not true of long span bridges where secondary stresses are significant and are taken into account. In masonry arches for building walls they can be ignored safely.

Figure 2 shows the forces and reactions within and upon a minor concrete masonry arch. The external load may consist of a uniform load, w, as shown, a concentrated load, or other. A horizontal thrust, H, is assumed to act at the crown, and its point of application is assumed to be at the upper middle-third limit (upper edge of kern) of the arch section. At the skewback (left-hand reaction), a reaction, F, is assumed to act at the lower middle-third limit (lower edge of kern) of the section. These assumptions for the design of minor arches, that the equilibrium polygon lies entirely within the middle third of the arch section, preclude the rotation of one section of the arch about the edge of a joint or the development of tensile stresses in either the intrados or extrados. The assumptions appear reasonable for symmetrical arches loaded equally and symmetrically, but may not be tenable for unsymmetrical arches or nonuniform loading. A vertical shear, VO, is shown also at the crown of the arch. This shear will equal zero when both halves of the arch are loaded equally, i.e., the general case.

There are four items to consider regarding structural failure of minor unreinforced concrete masonry arches:

Consider first the crushing of the masonry due to horizontal thrust. For minor arches (segmental or jack arches) the relationship between vertical loading or vertical reaction, V1 or W, and horizontal thrust, H, depends on the rise-to-span ratio, r/S, of the arch, and on the span/depth ratio, S/d. This relationship is shown in Figure 3. Knowing r/S and S/d of an arch, read the value W/2 H at the left-hand side of the graph. (Note: flat or jack arches are represented as r/S = 0).

Once the horizontal thrust has been determined, the maximum compressive stress in the masonry is determined by the following formula:

This value is twice an axial compressive stress on the arch due to a load H because the horizontal thrust is located at the edge of the kern.

Shear stress, or sliding of one section of the arch on another or on the skewback, requires consideration of the angular relationship of the reaction and the mortar joint, Figure 4. Stresses acting on the joint will depend on the angle formed between the reaction, F, and the inclined joint. This angle is:

For segmental arches with radial joints, the angle between the skewback and the vertical is:

For jack or flat arches in which the skewback equals ½ inch per foot of span (83 mm/m) for each 4 inches (102 mm) of arch depth, the angle that the skewback makes with the vertical is:

Shear force, Q, along the mortar joint is then equal to:

Finally, a check should be made to make certain the supporting adjacent masonry wall has sufficient shear strength and resistance to overturning against the horizontal thrust, H, of the concrete masonry arch. Figure 5 illustrates how shear resistance may be calculated. It is assumed that the horizontal thrust of the arch attempts to move a volume of masonry enclosed by the boundary lines ABCD and CDEF. The thrust, H, is acting against two shear planes of resistance, CF and DE. Shear stress along either plane can then be calculated as:

The tendency for the arch thrust, H, to overturn the supporting masonry wall must be checked, especially when the arch is near the wall top. No tension due to overturning moment should be permitted in the supporting wall section. Applicable equations are: 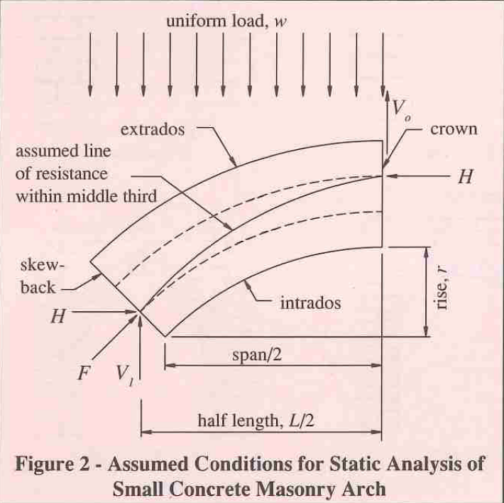 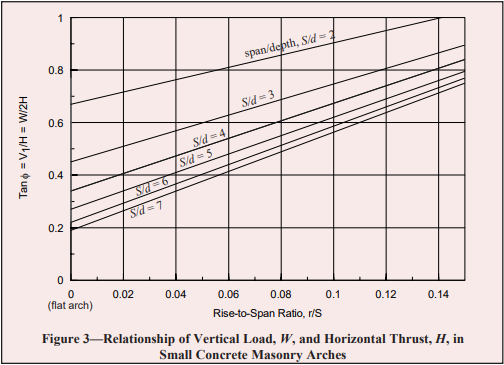 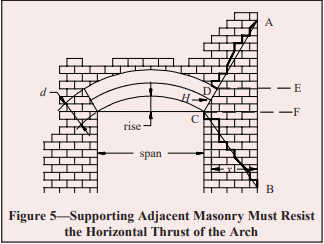 Since any section of an arch may be subjected to shear, moment, and thrust, it is important that arches be constructed with high quality concrete masonry units, mortar, and good workmanship. For this reason, the use of mortar conforming to ASTM C 270 (ref. 5), Type M, S, or N is recommended. Bond is an important factor in building arches with sufficient shear resistance to withstand the imposed loads. To obtain good bond, all mortar joints in the arch need to be completely filled. This is sometimes very difficult to do, especially where the concrete masonry units are laid in soldier bond or rowlock header bond. It is also hard to do where the curvature of the arch is of short radius, and mortar joints of varying thickness are used. But completely filled joints are paramount to a strong arch, and can be achieved with quality workmanship.

A segmental arch is to be supported on an unreinforced 8-inch (203 mm) hollow loadbearing wall. One end of the arch will be 24 inches (610 mm) from the end of the wall. Other given data are: 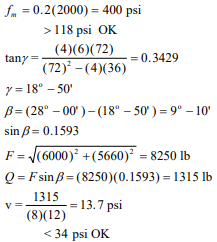 SUMMARY: The arch is sufficient to carry the loads, but the supporting wall will require reinforcement to increase its shear capacity.