Masonry infill refers to masonry used to fill the opening in a structural frame, known as the bounding frame. The bounding frame of steel or reinforced concrete is comprised of the columns and upper and lower beams or slabs that surround the masonry infill and provide structural support. When properly designed, masonry infills provide an additional strong, ductile system for resisting lateral loads, in-plane and out-of-plane.

Participating infills form a composite structural system with the bounding frame, increasing the strength and stiffness of the wall system and its resistance to earthquake and wind loads.

Non-participating infills are detailed with structural gaps between the infill and the bounding frame to prevent the unintended transfer of in-plane loads from the frame into the infill. Such gaps are later sealed for other code requirements such as weather protection, air infiltration, energy conservations, etc.

The 2011 edition of Building Code Requirements for Masonry Structures (MSJC Code, ref. 1) includes a new mandatory language Appendix B for the design of masonry infills that can be either unreinforced or reinforced. Appendix B provides a straightforward method for the design and analysis of both participating and non-participating infills. Requirements were developed based on experimental research as well as field performance.

Several stages of in-plane loading response occur with a participating masonry infill system. Initially, the system acts as a monolithic cantilever wall whereby slight stress concentrations occur at the four corners, while the middle of the panel develops an approximately pure shear stress state. As loading continues, separation occurs at the interface of the masonry and the frame members at the off-diagonal corners. Once a gap is formed, the stresses at the tensile corners are relieved while those near the compressive corners are increased.

As loading continues, further separation between the masonry panel and the frame occurs, resulting in contact only near the loaded corners of the frame. This results in the composite system behaving as a braced frame, which leads to the concept of replacing the masonry infill with an equivalent diagonal strut, as shown in Figure 1. These conditions are addressed in the masonry standard.

Participating masonry infills resist out-of-plane loads by an arching mechanism. As out-of-plane loads increase beyond the elastic limit, flexural cracking occurs in the masonry panel. This cracking (similar to that which occurs in reinforced masonry) allows for arching action to resist the applied loads, provided the infill is constructed tight to the bounding frame and the infill is not too slender. 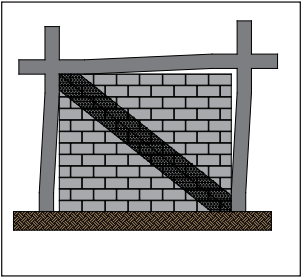 The maximum height-to-thickness ratio (h/t) of the participating infill is limited to 30 in order to maintain stability. The maximum thickness allowed is one-eighth of the infill height.

The MSJC Code requires participating infills to fully infill the bounding frame and have no openings—partial infills or infills with openings may not be considered as part of the lateral force resisting system because structures with partial infills have typically not performed well during seismic events. The partial infill attracts additional load to the column due to its increased stiffness; typically, this results in shear failure of the column.

The in-plane design is based on a braced frame model, with the masonry infill serving as an equivalent strut. The width of the strut is determined from Equation 1 (see Figure 1).

The term λstrut, developed by Stafford Smith and Carter (ref. 2) in the late 60s, is the characteristic stiffness parameter for the infill and provides a measure of the relative stiffness of the frame and the infill. Design forces in the equivalent strut are then calculated based on elastic shortening of the compression-only strut within the braced frame. The area of the strut used for that analysis is determined by multiplying the strut width from Equation 1 by the specified thickness of the infill.

The infill capacity can be limited by shear cracking, compression failure, and flexural cracking. Shear cracking can be characterized by cracking along the mortar joints (which includes st epped and horizontal cracks) and by diagonal tensile cracking. The compression failure mode consists of either crushing of the masonry in the loaded diagonal corners or failure of the equivalent diagonal strut. The diagonal strut is developed within the panel as a result of diagonal tensile cracking. Flexural cracking failure is rare because separation at the masonry-frame interface usually occurs first; then, the lateral force is resisted by the diagonal strut.

As discussed above, the nominal shear capacity is determined as the least of: the capacity infill corner crushing; the horizontal component of the force in the equivalent strut at a racking displacement of 1 in. (25 mm); or, the smallest nominal shear strength from MSJC Code Section 3.2.4, calculated along a bed joint. The displacement limit was found to be a better predictor of infill performance than a drift limit.

The equations used in the code are the result of comparing numerous analytical methods to experimental results. They are strength based. The experimental results used for comparison were a mixture of steel and reinforced concrete bounding frames with clay and concrete masonry. While some methods presented by various researchers are quite complex, the code equations are relatively simple.

As previously mentioned, the maximum thickness allowed for calculation for the out-of-plane capacity is one-eighth of the infill height. Gaps between the bounding frame on either the sides or top of the infill reduce the arching mechanism to a one-way arch and are considered by the code equations. Bounding frame members that have different cross sectional properties are accounted for by averaging their properties for use in the code equations.

Because non-participating infills support only out-of-plane loads, they must be detailed to prevent in-plane load transfer into the infill. For this reason, MSJC Code Section B.2.1 requires these infills to have isolation joints at the sides and the top of the infill. These isolation joints must be at least ⅜ in. (9.5 mm) and sized to accommodate the expected design displacements of the bounding frame, including inelastic deformation due to a seismic event, to prevent the infill from receiving in-plane loadings. The isolation joints may contain filler material as long as the compressibility of the material is taken into consideration when sizing the joint.

Mechanical connectors and the design of the infill itself ensure that non-participating infills support out-of-plane loads. Connectors are not allowed to transmit in-plane loads. The masonry infill may be designed to span vertically, horizontally, or both. The masonry design of the non-participating infill is carried out based on the applicable MSJC Code sections for reinforced or unreinforced masonry (Section 3.2 for unreinforced infill and Section 3.3 for reinforced infill using strength design methods). Note that there are seismic conditions which may require the use of reinforced masonry.

Because they support only out-of-plane loads, non-participating infills can be constructed with full panels, partial height panels, or panels with openings. The corresponding effects on the bounding frame must be included in the design.

The MSJC Code provides guidance on the design loads applied to the bounding frame members; however, the actual member design is governed by the appropriate material code and is beyond the scope of the MSJC Code.

The presence of infill within the bounding frame places localized forces at the intersection of the frame members. MSJC Code Section B.3.5 helps the designer determine the appropriate augmented loads for designing the bounding frame members. Frame members in bays adjacent to an infill, but not in contact with the infill, should be designed for no less than the forces (shear, moment, and axial) from the equivalent strut frame analysis. In the event of infill failure, the loading requirement on adjacent frame members ensures adequacy in the frame design, thus preventing progressive collapse.

The shear and moment applied to the bounding column must be at least the results from the equivalent strut frame analysis multiplied by a factor of 1.1. The axial loads are not to be less than the results of that analysis. Additionally, the horizontal component of the force in the equivalent strut is added to the design shear for the bounding column.

Similarly, the shear and moment applied to the bounding beam or slab must be at least the results from the equivalent strut frame analysis multiplied by a factor of 1.1, and the axial loads are not to be less than the results of that analysis. The vertical component of the force in the equivalent strut is added to the design shear for the bounding beam or slab.

The bounding frame design should also take into consideration the volumetric changes in the masonry infill material that may occur over time due to normal temperature and moisture variations. Shrinkage of concrete masonry infill material may open gaps between the infill and the bounding frame that need to be addressed. Guidance for these volumetric changes is provided in MSJC Code Section 1.7.5.

Mechanical connectors between the bounding frame and the infill provide out-of-plane support of the masonry, for both participating and non-participating infills. Connectors are required only for the direction of span (i.e., at the top and bottom of the infill for infill spanning vertically, for example). The connectors must be designed to support the expected out-of-plane loads and may not be spaced more than 4 ft (1.2 m) apart along the perimeter of the infill. Figure 2 shows an example of a mechanical connector composed of clip angles welded to the bottom flange of the steel beam. 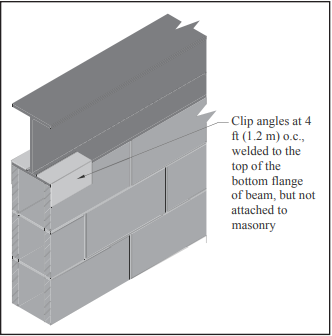 Consider the simple structure of Figure 3. The east and west side walls are concrete masonry infills laid in running bond, while the north and south walls are store-fronts typical of convenience stores. Steel frames support all gravity loads and the lateral load in the east-west direction. The bounding columns are W10x45s oriented with the strong axis in the east-west direction. The bounding beams above the masonry infill are W10x39s. The masonry infill resists the lateral load in the north-south direction.

MSJC Code Section B.3.4.3 requires Vn inf to be the smallest of the following:

MSJC Code Section 3.2.4 requires the nominal shear strength not exceed the least of the following: 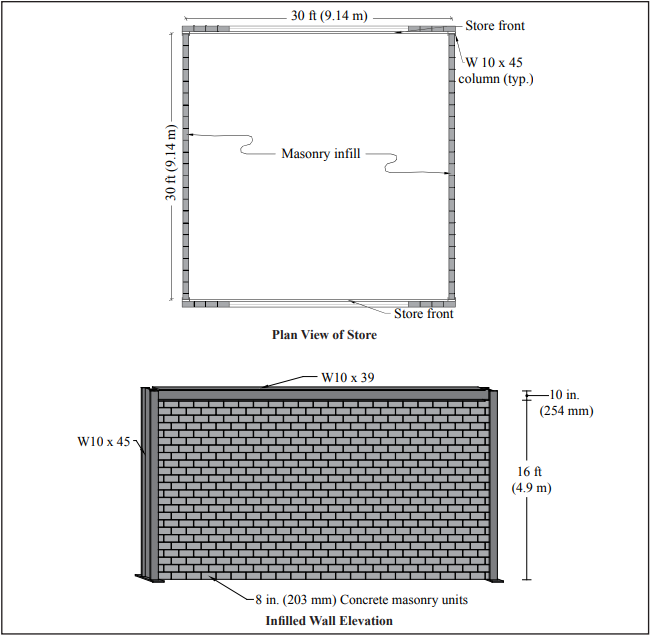 As a result of the wind loading, the reaction transmitted to the roof diaphragm is:

This reaction is divided evenly between the two masonry infills, so the shear per infill is 3,030 lb (13.5 kN).

To be conservative, the axial load to the masonry infill is taken as zero.

The width of the equivalent strut is calculated by Equation 1 (MSJC Code Equation B-1):

where λstrut is given by Equation 2 (Code Equation B-2).

Using Equation 2, the characteristic stiffness parameter, λstrut, for this infill is then:

The resulting strut width is then:

The stiffness of the equivalent braced frame is determined by a simple braced frame analysis where the stiffness is based on the elastic shortening of the diagonal strut. The strut area is taken as the width of the strut multiplied by the net thickness of the infill.

The nominal shear capacity, Vn, is then the least of:

The design shear capacity is:

The design shear capacity far exceeds the factored design shear of 3,030 lb (13.5 kN), so the infill is satisfactory for shear.

Design the infill from the previous example for an out-of-plane wind load W of 24 lb/ft² (1.2 kPa) per ASCE 7-10 acting on the east wall, using Type S PCL mortar, and units with a nominal thickness of 8 in. (203 mm). Assume hollow units with face-shell bedding only and that the infill is constructed tight to the bounding frame such that there are no gaps at the top or sides of the infill. See Table 3 for frame properties. 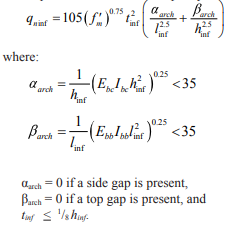 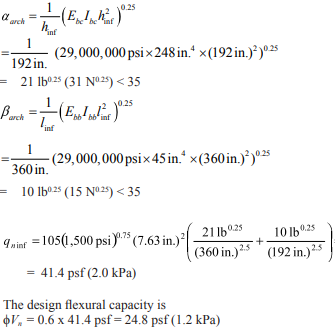 The design flexural capacity exceeds the factored design wind load pressure of 24 lb/ft² (1.2 kPa), so the infill is satisfactory for out-of-plane loading