For commercial buildings, the IECC provides three alternatives for demonstrating building compliance, using: prescriptive criteria; a whole-building performance analysis; or demonstrating compliance with ASHRAE/IESNA Standard 90.1, Energy Standard for Buildings Except Low-Rise Residential Buildings (ref. 3). Although not speciﬁcally referenced in the code, the COMcheck software program (ref. 4) developed by the U. S. Department of Energy is a commonly accepted compliance tool.

The prescriptive criteria present an independent requirement for each building envelope component.

The whole-building performance compliance option is based on an analysis which simulates a full year of building operation, accounting for virtually all aspects of building energy use. Detailed energy analysis software, such as DOE-2 (ref. 5), is typically used when employing this option. This compliance path offers the maximum design ﬂexibility, but requires a fairly rigorous and detailed analysis.

The IECC prescriptive tables were signiﬁcantly reformatted between the 2003 and 2006 editions of the code. In the 2003 IECC, the thirty-seven prescriptive compliance tables represent thirty-seven climate zones as deﬁned in Chapter 9 of the code. Each table is further subdivided into four sets of requirements based on the building’s percentage glazing. Each table includes minimum requirements for windows and glass doors, skylights, slab or below-grade walls, roofs, above-grade walls, and ﬂoors over outdoor air or unconditioned space. Each of these elements must independently meet the stated requirement in order for the building to comply using prescriptive compliance. In other words, if the building’s roof insulation does not meet the code minimum, the building does not comply, even if other elements exceed the minimum requirements.

The charging paragraph for above grade walls, code section 802.2.1, states: “Concrete masonry units (CMU) at least 8 inches (203 mm) nominal in thickness with essentially equal amounts of mass on either side of the insulation layer are considered as having integral insulation; however, the thermal resistance of that insulation shall not be considered when determining compliance.” The intent of this statement is to make the user aware that the R-value of masonry cell insulation has already been accounted for in determining the prescriptive requirements listed in the tables, and should not be counted towards meeting the code-mandated insulation R-value.

Concrete masonry walls without integral insulation, such as masonry cavity or fully grouted walls, are required to use the Other Masonry Walls row of the table for compliance.

Note also that the requirements for R-value cavity and R-value continuous are used in conjunction to determine compliance. In other words, if the table lists requirements for both cavity and continuous insulation, the wall must include both to comply. “NA” means that the stated condition does not apply. When R-0 appears in the table, it indicates that no additional insulation in required for the condition listed.

The IECC terminology is slightly different from commonly accepted masonry terminology. As an example, “cavity” in the IECC refers to the space between framing or furring, thus “NA” appears under the No framing column for all R-value cavity entries. Table 2 lists the terms as used in the IECC and deﬁnes their applicability to masonry walls.

Buildings with thinner walls, or other concrete masonry walls not meeting these descriptions, must use either the COMcheck compliance software or ASHRAE/IESNA Standard 90.1, Energy Standard for Buildings Except Low-Rise Residential Buildings to verify compliance.

Note that the prescriptive requirements of Standard 90.1, while similar to those in the IECC, include an option for compliance with an overall wall U-factor in addition to adding a certain insulation R-value to the wall (as shown in Table 1). This may be a good option for concrete masonry walls with proprietary inserts, or other walls that have better thermal performance than that assumed in the code. 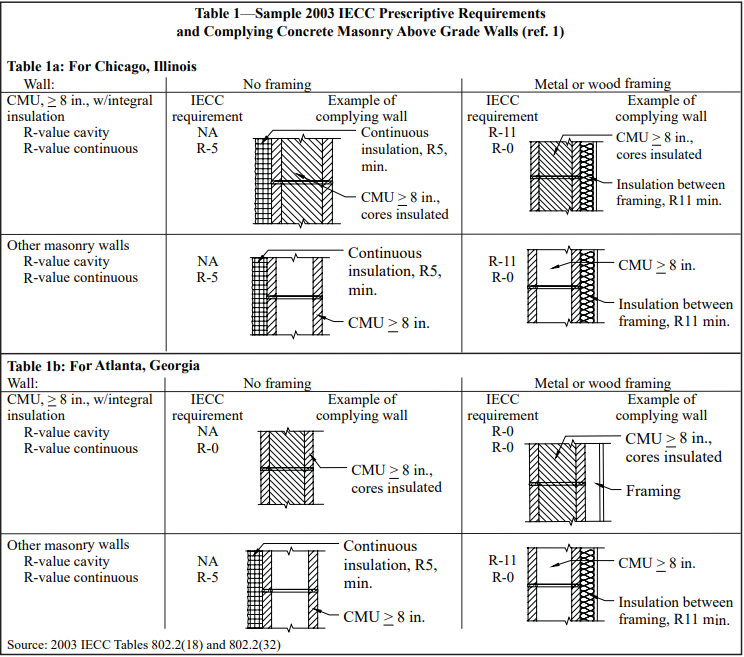 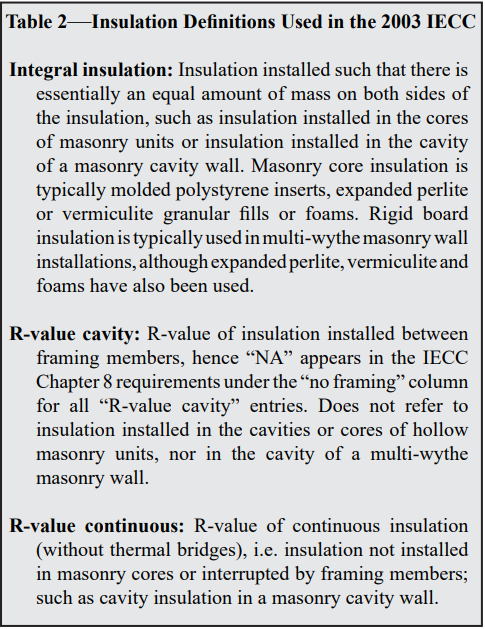 The prescriptive wall requirements for commercial buildings, listed in IECC Table 502.2(1), were signiﬁcantly simpliﬁed in the 2006 edition of the IECC. The number of climate zones was reduced to eight, wall requirements are now independent of the amount of glazing and all concrete masonry walls must now comply with a single requirement.

In climate zones 1 and 2, concrete masonry walls do not require any insulation. While the ﬁrst option indicated in IECC Table 502.2(1) table for mass walls speciﬁes continuous insulation in climate zones 3 through 8, footnotes to the table provide the following options. In climate zones 3 and 4, concrete masonry walls with ungrouted cells ﬁlled with insulation such as vermiculite, perlite or foamed-in-place (with a thermal conductivity less than or equal to 0.44 Btu-in./h.ft2.oF, or R-value per inch ≥ 2.27 (63.4 W mm/m2.oC)) comply, as long as the amount of grouting does not exceed 32 in. (813 mm) o.c. vertically and 48 in. (1,219 mm) o.c. horizontally.

In climate zones 5 through 8, there are several options for compliance:

Using either the 2003 or 2006 IECC, the trade-off option allows the user to demonstrate compliance based on the building envelope as a whole, rather than on the prescriptive component-by-component basis. These trade-offs are most often implemented using easily-implemented software, such as COMcheck.

There are two main beneﬁts to using trade-off software for compliance, rather than prescriptive tables. First, the user gains design ﬂexibility because parameters such as increased glazing area can be offset by increasing roof or wall insulation. Second, once the basic building data is entered into the program and saved, design changes or the building location can be quickly modiﬁed, and compliance immediately redetermined.

The prescriptive compliance tables in Standard 90.1 are organized by climate zone, as they are in the IECC. Tables list requirements for each building envelope element by building type: nonresidential, residential or semiheated (see Table 3). The bottom half of each table contains glazing requirements based on the percentage glazing area, similar to the 2003 IECC. Unlike the 2003 IECC, however, only the glazing U-factor and solar heat gain coefﬁcient (SHGC) requirements vary with the building’s percentage of glazed area; other building envelope requirements are independent of glazed area.

Separate requirements are listed for each of the four above-grade wall construction classes: mass walls, such as concrete masonry; metal building; steel frame; and wood frame. For each wall and building type, the user may comply by using either the minimum R-value of the insulation added to the wall, or using the wall assembly U-factor.

For example, Table 3 indicates that mass walls must either have a maximum U-factor of 0.151 Btu/h ft2.oF (R-6.6) (0.86 W/m2.oC) or continuous R-5.7 (1.00 m2.oC/W) insulation to comply with the prescriptive requirements for nonresidential buildings. The asterisk, however, indicates an exception for concrete masonry walls: “Alternatively, for mass walls, where the requirement in the table is for a maximum assembly U-0.151 followed by an asterisk only, ASTM C90 concrete block walls, ungrouted or partially grouted at 32 in. or less on center vertically and 48 in. or less horizontally, shall have ungrouted cores ﬁlled with material having a maximum thermal conductivity of 0.44 Btu in./h ft2 oF.” (ref. 3) This maximum thermal conductivity corresponds to a minimum R-value per inch of 2.27 ft2.oF.h/Btu. in. (63.4 W mm/m2.oC). Materials meeting this threshold include vermiculite, perlite and cellulosic loose ﬁlls, as well as most rigid and foam insulations.

In general, this exception applies to nonresidential buildings located in the shaded area of Figure 1. In essence, the exception allows the majority of single wythe ungrouted and partially grouted concrete masonry walls containing insulation in the ungrouted cells to comply with Standard 90.1, and hence with the IECC, regardless of that wall’s R-value.

The Standard 90.1 building envelope trade-off option uses the EnvStd (ref. 9) software to determine compliance. Similar to COMcheck, the user essentially “builds” the project by entering building envelope thermal characteristics. The software combines this input with embedded weather data to perform a location-speciﬁc analysis, accounting for more design variables than can be included in the prescriptive tables. 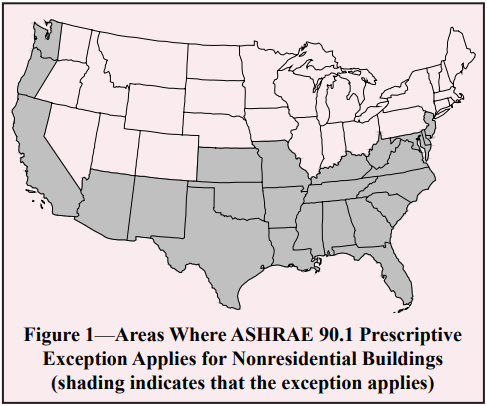