On all construction projects, including those involving segmental retaining walls (SRWs), it is the owner’s responsibility to achieve coordination between construction and design professionals that ensures all required design, engineering analysis, and inspection is provided. In many cases, a design professional such as a site civil engineer or an architect acts as the owner’s representative. In either case, the owner or owner’s representative should ensure that the engineering design professionals’ scope of work, roles and responsibilities are clearly defined so that there is no ambiguity regarding responsibility for investigation, analysis and design, and that all required testing is performed.

The roles outlined in this TEK are typical industry roles for various engineering disciplines. SRW design and construction should generally follow these traditional roles. However, these roles may vary from project to project, depending on the contractual obligations of each consultant. For example, for simpler projects, such as residential landscapes, one design professional may take on the responsibility of several roles, if acceptable to local building code requirements.

For tall or complex walls and for commercial projects, each of these roles is likely to be provided by separate firms, each with expertise in a particular discipline. The discussion in this TEK is generally oriented towards projects where several design professionals are contracted.

Reinforced SRWs, because of their nature as composite soil structures, may have unique design and inspection considerations for the site civil engineer, the geotechnical engineer, and the independent testing agency. These considerations are discussed in further detail in the following sections.

Detailed guidance on SRW design, construction and inspection can be found in references 1 through 3. 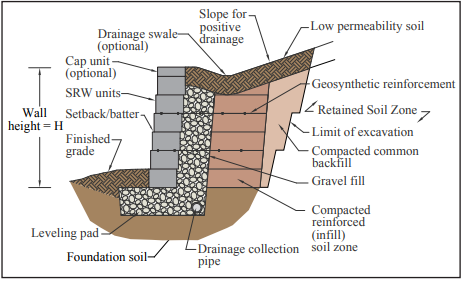 The owner/developer, or a designated representative, is ultimately responsible for ensuring that all applicable requirements of governing authorities for the permitting, design, construction and safety on the project are addressed. The owner or owners’ representative should ensure that the types of retaining walls specified are appropriate for the site conditions and ensure the wall alignment fits within the site’s space limitations. It is the owner’s or owner’s representative’s responsibility to contract an engineer to provide site civil engineering including site layout, drainage and grading. The owner must also ensure that a geotechnical engineer and testing agency are contracted to provide all necessary and required soils exploration, analysis and earthwork inspection for the entire project, including in the vicinity of the SRWs, just as they do in the vicinity of building structures. The owner or owner’s representative must also ensure that a qualified wall design engineer provides an SRW structural design.

The most straightforward means for the owner or owner’s representative to ensure all engineering roles are well-defined is for the SRW design engineer’s assigned roles to be the same as those traditionally given to a structural engineer designing a cast-in-place concrete retaining wall, and for the other design professionals, such as site civil and geotechnical engineers, to also provide the same roles and services as they would for a cast-in-place retaining wall.

Table 1 contains an itemized list of the suggested roles for each professional discipline for larger walls and commercial projects involving SRWs. A more thorough explanation of the site civil engineer’s, geotechnical engineer’s and SRW engineer’s roles, and construction observation and testing roles is provided in the following sections. The actual responsibilities for each discipline should be contractually based. 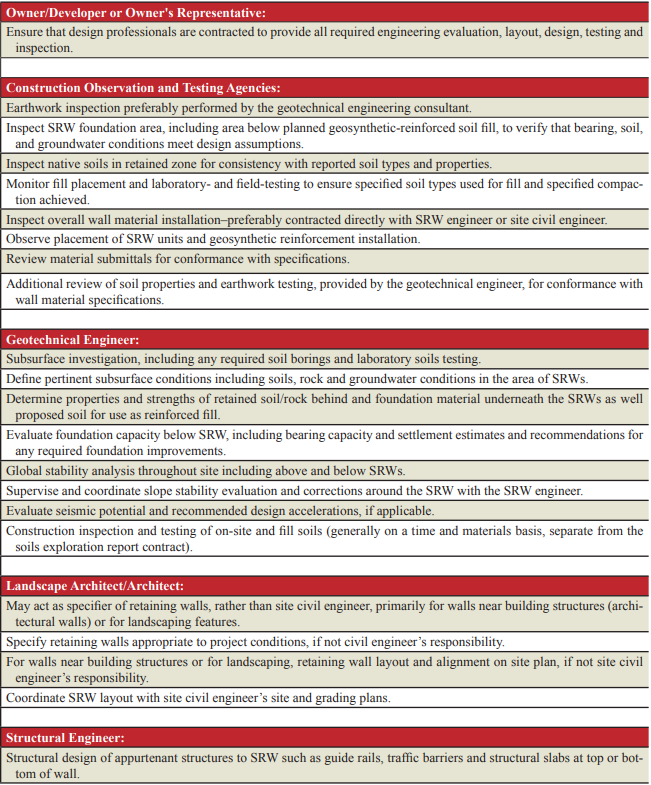 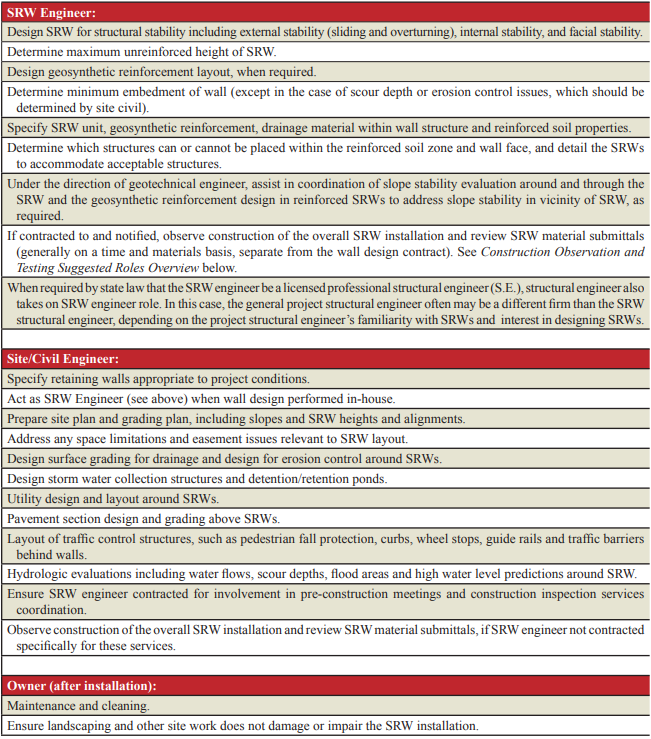 The site civil engineer should evaluate and design for any hydrologic issues and structures such as: culverts, open channels, detention/retention ponds, scour and erosion control details, as well as defining high water levels, flow volumes, flood areas and scour depths. The site civil engineer should provide any pertinent hydrologic data that may affect the SRW to the SRW engineer.

When the geotechnical consultant is retained to provide construction observation and soils testing for a project, the contract should include inspection and testing of SRW earthwork along with all other earthwork on site. See TEK 18-11A, Inspection Guide for Segmental Retaining Walls (ref. 3) for further discussion of inspection roles.

While geotechnical engineers should be contracted for the same traditional roles regarding SRWs as for other structures, the soils engineering for SRWs may require some slightly different methods of analysis compared to evaluating soils below rigid structures on spread footings. Design guidelines for SRWs are provided in Reference 1.

As noted previously, the SRW design engineer should serve the same roles for SRWs as a structural engineer would for the design of a cast-in-place concrete retaining wall. In some cases, the site civil engineering firm may also act as the SRW engineer, while in others, the SRW design engineer will be a separate firm. The SRW design engineer should design a stable SRW, given the specified wall geometry and site conditions provided by the site civil and geotechnical engineers. The SRW engineer’s duties typically include determining the SRW’s maximum stable unreinforced height and providing a geosynthetic reinforcement layout design when required.

The SRW design engineer is typically responsible for preparing the SRW construction drawings, and for determining the internal stability, facial stability of the SRW units, internal drainage of the SRW (both at the face of the wall and at the rear of the reinforced soil mass, if required), external stability (sliding and overturning), and internal compound stability.

The SRW designer engineer’s output generally consists of specifications of wall components, a wall elevation detail, typical cross sections, details for any required drainage materials within or just behind the wall system, and details for how to incorporate any other structures (utilities, pipe penetrations, posts, etc.), if feasible, within the reinforced zone and wall face.

The SRW design engineer should typically not assume any duties typically relegated to the geotechnical engineer elsewhere on site. While an SRW engineer may be asked to participate in addressing the slope stability immediately around the SRW or foundation improvements in the soil below an SRW, it is recommended that the geotechnical engineer be clearly contracted to have ultimate responsibility for all slope stability and bearing capacity/settlement concerns on site, including those below and around SRWs.

The soil in the reinforced zone should be checked to ensure it meets specifications; just as concrete and steel are inspected in a cast-in-place concrete retaining wall.

The wall contractor is responsible for quality control of the wall installation: performing necessary observation and testing to verify that the work performed meets minimum standards.

It is the owner’s or owner’s representative’s responsibility to perform quality assurance: auditing and verifying that the quality control program is being performed properly.

Segmental retaining walls are designed to provide a long life with little to no maintenance required. After the SRW installation is complete, some very basic maintenance will help maximize the SRW project’s beauty and durability.

The most basic maintenance task is a periodic visual assessment of the SRW units and overall wall. If coatings have been applied to the wall, the need for re-coating should be assessed based on the coating manufacturer’s recommendations and the exposure conditions of the wall. Table 2 lists regular inspection tasks that can be performed on SRWs and their suggested frequency.

Periodic cleaning of SRWs may be desired to maintain the wall’s aesthetics. Cleaning recommendations for SRWs are essentially the same as those for other concrete masonry walls. The reader is referred to: TEK 8-4A, Cleaning Concrete Masonry; TEK 8-2A, Removal of Stains from Concrete Masonry; and TEK 8-3A, Control and Removal of Efflorescence (refs. 5, 6, 7), for more detailed guidance.

In addition to maintenance and cleaning, the owner is also responsible for ensuring that subsequent digging or trenching, such as for landscaping, does not impact the SRW installation. During any excavation, care should be taken to leave a zone of undisturbed soil behind the segmental retaining wall. Particular care should be taken to ensure that excavation does not damage, cut or remove the geosynthetic soil reinforcement, if present. For this reason, the owner should maintain a record of the installation, including the locations of geosynthetic reinforcement.

Once established, tree roots do not typically damage an SRW. The roots will typically not damage the wall face from behind because the drainage aggregate behind the SRW face does not support root growth. In fact, the root system can act as additional soil reinforcement, helping to further stabilize the soil. When newly planted, trees and other large vegetation should be adequately supported to prevent them from toppling and potentially damaging the SRW.