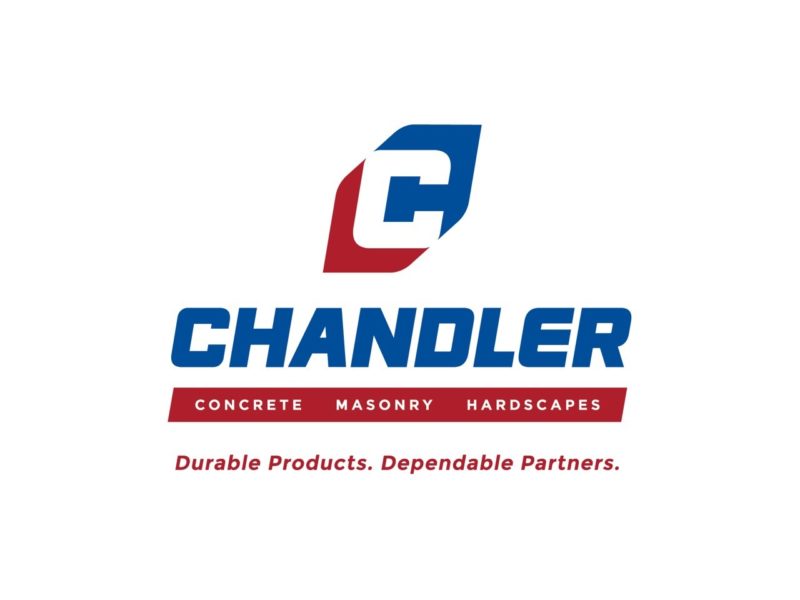 Openings in concrete masonry walls utilize lintels and beams to carry loads above the openings. When openings incorporate rolling doors (also referred to as overhead coiling doors or coiling doors), wind loads on the door are transferred to the surrounding masonry through the door guides and fasteners.

In some instances, the rolling doors have been designed for speciﬁc wind load applications, and are heavily dependent on the structural integrity of the door jamb members as they are attached to building walls at jamb locations. This TEK discusses the forces imposed on a surrounding concrete masonry wall by rolling doors, and includes recommended details for jamb construction. Lintel design, to carry the loads imposed on the top of the opening, are covered in TEK 17-1D, Allowable Stress Design of Concrete Masonry Lintels, and 17-2A, Precast Concrete Lintels for Concrete Masonry Construction (refs. 1, 2).

Architects and building designers should determine the loads that rolling doors exert on the wall around the opening. Dead loads include the weight of the door curtain, counter-balance, hood, operator, etc., that is supported by the wall above the opening. Live loads result from wind that acts on the door curtain. Rolling doors are available with windlocks, which prevent the door curtain from leaving the guides due to wind loading. On doors without windlocks, the only wind load force that the curtain exerts on the guides is normal to the opening. For doors with windlocks, there is an additional load parallel to the opening (see Figures 1 and 2 for facemounted and jamb-mounted doors, respectively). This load is the catenary tension that results when the curtain deﬂects sufﬁciently to allow the windlocks to engage the windbar in the guide. This force acts to pull the guides toward the center of the opening. The door is exposed to a additive wind loads, from both inside and outside the building.

Calculating the parallel force involves several variables, the most prominent of which are the width of the opening and the design wind load. It is also important to note that the door must withstand both positive and negative wind loads. Including these forces in the design of the jamb and its supporting structure can help prevent a jamb failure and allow the building to fully withstand its speciﬁed wind load requirements. The rolling door manufacturer can provide a guide data sheet for quantifying the loads imposed by the overhead coiling doors due to the design wind load.

The following conditions need to be considered: 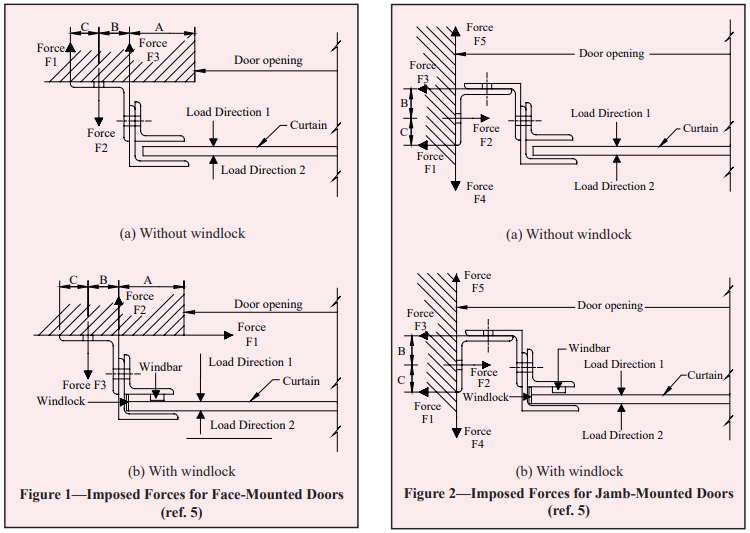 Rolling door contractors and installers sometimes encounter reinforcement in walls at locations where door jamb fasteners have been speciﬁed. Arbitrarily changing either the reinforcement location or the fastener location is not recommended, as either can negatively impact performance. Changing the door manufacturer’s recommended jamb fastener locations may reduce the structural performance of the rolling door or possibly void the ﬁre rating.

The typical masonry jamb detail shown in Figure 3 indicates recommended vertical reinforcement locations for concrete masonry jambs to provide an area for the door fasteners. The detail shows a “reinforcement-free zone” to allow for fasteners of either face-mounted or jamb-mounted rolling doors. The Door and Access Systems Manufacturers Association International (DASMA) recommends that vertical reinforcement should be within 2 in. (51 mm) of either corner of the wall at the jamb (ref. 4).

Before installing fasteners in existing masonry construction, the following steps should be followed to locate the reinforcement, to avoid interference:

Once the steel reinforcement has been located, if it is concluded that the reinforcement will interfere with installing jamb fasteners, DASMA recommends that one of the following courses of action be taken: 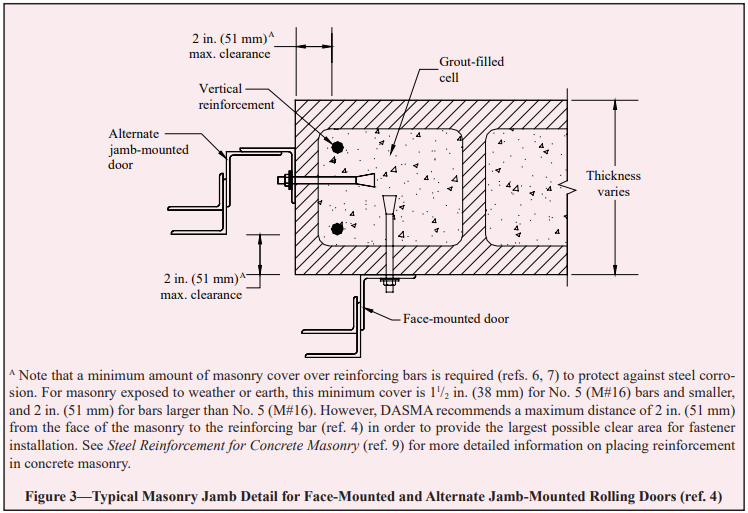 When installed in a ﬁre-rated concrete masonry wall, rolling steel ﬁre doors must meet the code-required ﬁre rating corresponding to the ﬁre rating of the surrounding wall. For ﬁre testing, the doors are mounted on the jambs of a concrete masonry wall intended to replicate ﬁeld construction. The ﬁre door guides must remain securely fastened to the jambs and no “through gaps” may occur in the door assembly during the test. 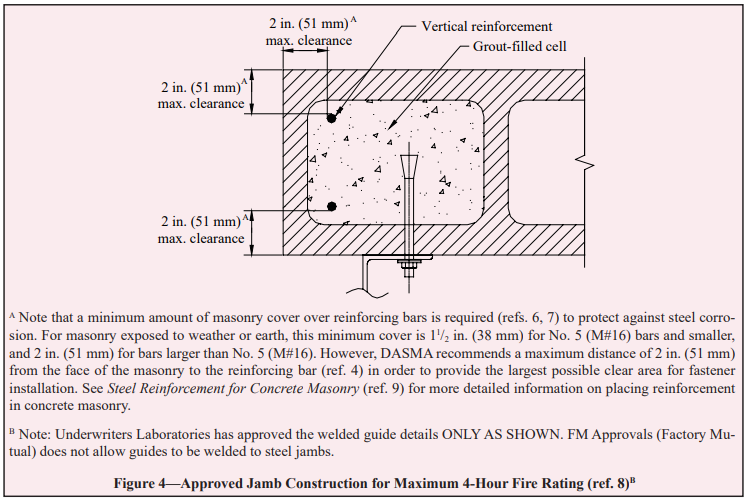