Joyce Owens, FAIA, RIBA, the principal architect at Studio AJO on building on the shore, in London, on "value engineering," durability, and why the future for AIA is all about climate change 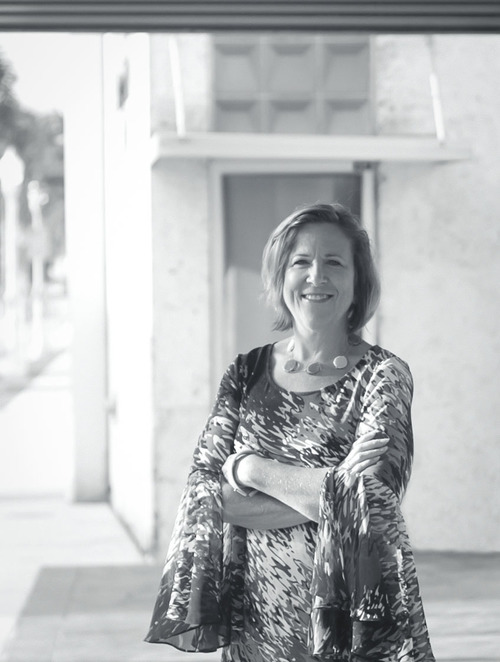 "It’s so flexible, CMU. It’s a very easy material to make work. As an architect that builds many different types of buildings, it’s a nice material to use for creating new ideas because it is so flexible."

Joyce Owens FAIA RIBA is the principal architect at Studio AJO, which is based on Main Street in Fort Myers, Florida. Her client list extends not only throughout the United States but also to the United Kingdom and Italy.

Before opening in Florida, Owens was a co-founding partner at the London-based firm Azman Owens Architects, where she worked with clients like now-British Prime Minister Boris Johnson, fashion gurus Alexander McQueen and Isabella Blow and many more.

Her work has received accolades and awards from the UK’s Royal Institute of British Architects (RIBA) and AIA, too. She’s been published in The New York Times, the Sunday Times in London, Elle Magazine and several other esteemed publications. She was also an architectural columnist for the Fort Myers News-Press and USA TODAY.

In 2017, she was the president of the AIA Florida.

Via the phone she recently talked with NCMA openly about her career and why she is “a big masonry fan.”

On how her career moved abroad and then back again:

“I lived and worked in Florida a while and we used CMU a lot because in commercial building 30 years ago when I was there, working with masonry was a good choice with commercial building. But we weren’t really using it with residential. We had moved away from it. Because originally in the 1950s and 1960s — the mid-century — they used masonry all the time so we moved away from it for a little bit.

“When I came back to Florida, I started doing a lot of residential work. I do commercial work as well — but I found that on the islands where we were building, they were still using timber. So I started pushing these houses on the beach to be built with CMU and now we use CMU almost exclusively. We don’t even use wood pilings anymore.

“I’m finding that, on the beach, it’s a much stronger way to build.”

What do you see for coastal areas for the future?

“I think that masonry is going to be the answer moving forward if we want to build strong in coastal areas. We really have to be building with CMU. As opposed to putting pressure-treated pilings in the ground — it’s much better to do that with CMU in the ground. And then even as you go up, even if some moisture comes through, outside the block, it seems to handle better than wood does.”

What about from working with it from a pure design point of view?

“It’s so flexible, CMU. It’s a very easy material to make work. As an architect that builds many different types of buildings, it’s a nice material to use for creating new ideas because it is so flexible.”

How has building in Florida changed over the decades?

“In Florida, everybody thought that ‘oh, it’s really easy to build in Florida because it’s just hot and warm, that’s not a problem.’ But what they didn’t realize is that it’s very humid in that climate and you can’t build the same way you as you do in California, for example. It’s a whole different way of building. So now they’re realizing that if you want your buildings to last in Florida, you have to build really well.

“I was in Boston two weeks ago and I went to look at an amazing campus that was all built in concrete by a very famous architect, and they were working on the master plan to build dormitories for the campus that was built in the 1960s. And I couldn’t believe they were building wood-framed dormitories in that climate. It just seems crazy to me to do that on a campus that was perfectly intact after all those years. The concrete had lasted very well. Of course it needed updating just like all buildings, but I couldn’t believe they went that way. And it was happening right in front of us. It just seemed like a mistake.

“So I have to say, not everyone is building for durability.”

“[CMU] is much stronger, it’s much more durable. It’s much less susceptible to rot. It may be more expensive but it’s going to take less maintenance and it’s going to outlast timber.

“And I’m not against wood, but it just needs to be considered for its place.”

On the expression ‘value engineering’:

“In construction there’s a term that we use when we want to make things less expensive. So you might say ‘if we use another product — let’s say we’re using trim woods on the outside — if we use another product we might save 50 percent on our material cost.’ Or ‘if we don’t use this expensive air conditioning system that’s ten times more efficient but use this less expensive system that’s only five times as efficient, we’ll save money.’ So those are value engineering decisions that you make typically after the building has been designed and priced. So it typically comes after bidding.

“So somebody said to me the other day, which I thought was quite clever, about the idea of value engineering that it’s only value engineering if there’s real value you’re taking into the project. So sure, you’re going to go to wood instead, but in the long-term, is there real value in that? Does the client understand the long-term effects of choosing wood over masonry?

“And I’m not saying anything bad about wood, it has its place. I’m not ragging on it in any way. It’s a great material as well, which they’re making very sustainable. And that’s part of my bugbear with the masonry, which is that they have to work harder now to make their product more sustainable. I really try to push that when I give my talks. Now is the time for the masonry industry — because they have a great product — to make CMU and other masonry materials ‘carbon zero.’ If that can be figured out, concrete products would be used all the time in building.”

On climate, and where AIA is headed:

“I’m very involved with the AIA. And I’m currently on the strategic council. So I very much have my finger on the pulse of what AIA is doing as a national association. And we’ve always been committed to good building practices and addressing climate issues but in the next five years — as the decision was made just this year — all of our resources are going to go toward climate matters. We’re literally taking a look at all of our programs and refocusing them. We’re not going to get rid of all of them, but we’re going to put an emphasis on this whole climate action issue and how we address change and flooding and the rain that comes from all of our big storms. This is going to be very important.

“When I spoke recently in front of the masonry institute in California I said what you can do right now — and they seemed very interested in — is they can team up with the AIA to work together with some of their programs that are already in place to prove and show — alongside the architects — that their material is the best out there to address all of these climate action issues.

“We want you to be our partner in this. We want to work with you. The channels exist and the connection — on a national level — can happen again.”

For more on Joyce Owens and her work, click here.

A Big Statement with a Little Carbon Footprint