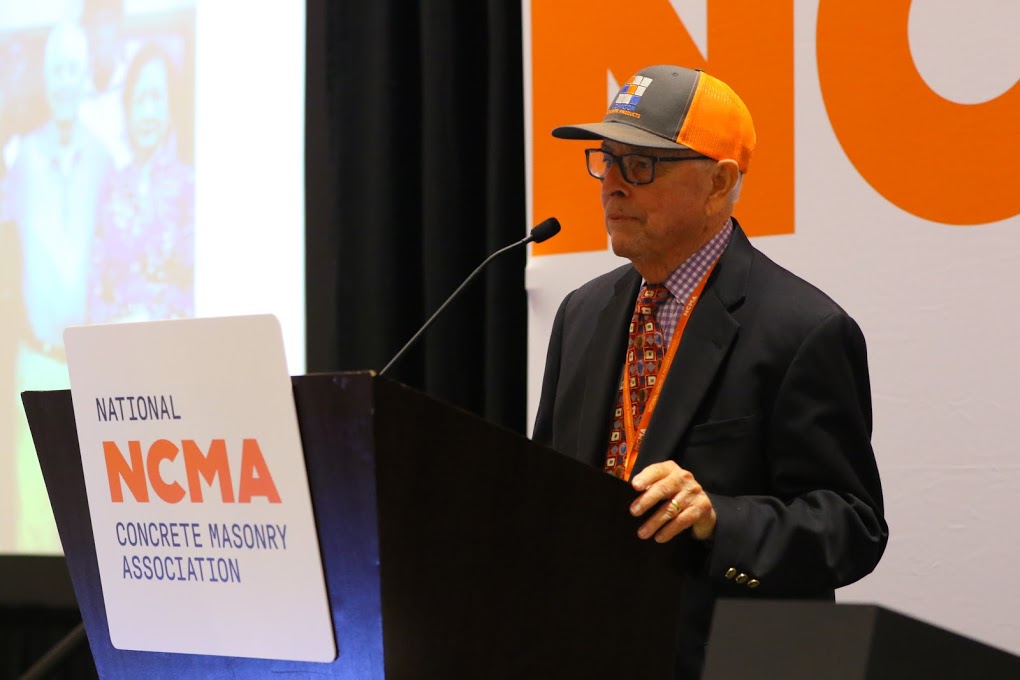 The individuals enshrined into NCMA’s Hall of Fame are those that have demonstrated exemplary leadership and service to the association and industry through a distinguished career. Inductees into the Hall of Fame also become Honorary Members of NCMA.

Born in Greenville, North Carolina in a tobacco farming community, Newsome eventually attended the University of North Carolina – Chapel Hill. He initially wanted to become a lawyer, and was accepted to go to law school, but ultimately decided against it and pursue a career in business.

Newsome was working as a salesman for Giant Cement in 1968 when he was hired to be general manager for Tufflite and Stalite, an expanded clay and shale company. Fourteen years later he was also hired to fill an additional role, as Executive Vice President of Johnson Concrete. Shortly thereafter, he helped guide a consolidation of two smaller plants into one larger one, in a successful effort that increased their business in the Piedmont area of North Carolina and elsewhere.In the decades after he steered Johnson Concrete’s expansion throughout the southeastern United States, supplying premium custom architectural block from Maryland to Florida.

“Charles is a visionary,” said Starling Johnson, Vice President of Sales for Johnson Concrete Products and close personal friend (and mentored apprentice) of Mr. Newsome. “When you ask him what he’s proud of, Stalite is high on his list. When he started, Stalite was made using sintering machines and its furthest customer was 125 miles away. Today, Stalite operates eight rotary kilns with patented technology, ships material all over the world, and is the industry leader in structural lightweight aggregate.”

A leading voice in the industry, Newsome was not only NCMA’s Chair of the Board in 2013 (in addition to serving on countless committees throughout the years), he also chaired the Carolinas Concrete Masonry Association, the Expanded Clay Shale and Slate Institute and was instrumental in establishing NCMA’s Young Professional Group (YPG).

He has been an early, and continues to be an ardent champion of the pursuit to create a commodity checkoff program for concrete masonry and actively supported both NCMA and the Mason Contractors Association of America political action committees. He has made numerous trips to Capitol Hill seeking congressional authorization and traveled extensively across the country to generate industry support for the checkoff program.

In addition to the milestones he’s achieved in business, his role as a philanthropist is just as exemplary. Newsome has completed more than 30 missionary trips to Africa, most of those times to the Zambian village of Mwandi. He personally led efforts to raise necessary funding and implement project to bring improved and more reliable electricity to the village, remodel a hospital, construct a church, and other similar charitable projects.

“A place in the NCMA Hall of Fame is an honor bestowed upon the finest individuals who have come through for our industry. It shines a light on a lifetime of service, leadership, and excellence. It recalls milestones achieved by deserving honorees that have benefited all of us,” said Robert Thomas, NCMA president. “Charles has been such a vital member of the association for so long, having served in a variety of capacities and we really could not be more proud to have this opportunity to celebrate his career.”

Newsome has been supported throughout his career and at the award ceremony by his wife, Chris, their children Jimmy, Helen and Josh, and their grandchildren Moses and Willoughby.