John A. Heslip's legacy for the concrete masonry industry remembered 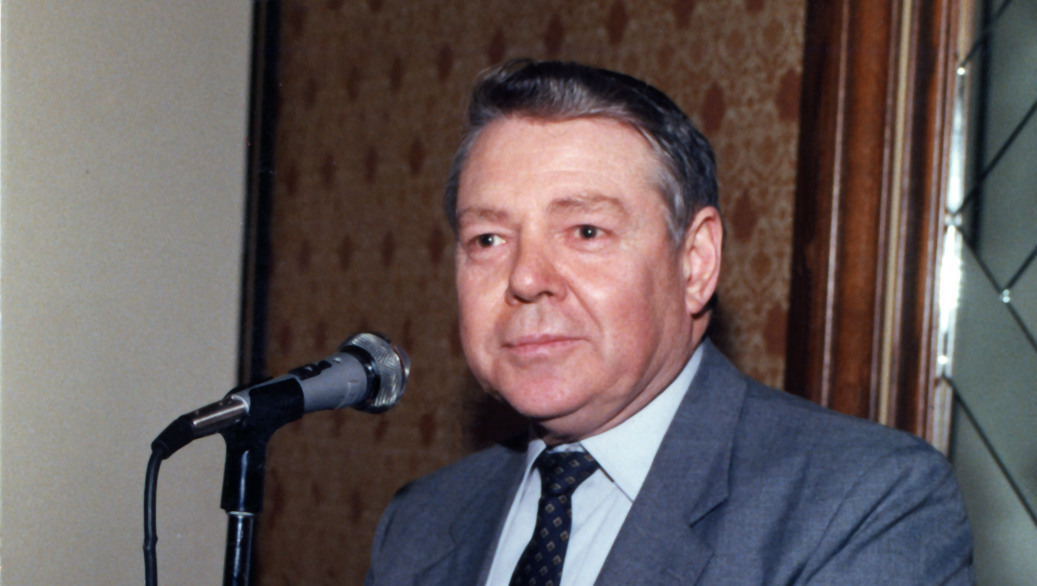 John A. Heslip, NCMA’s fourth chief executive, is being remembered for his unwavering passion in promoting the benefits of masonry to any architect that would listen.  Mr. Heslip, who served as NCMA’s president from 1985-1995, died on November 21, 2020 surrounded by family in Chapel Hill, NC.

“John demonstrated throughout his career that it was possible to advance an aggressive agenda needed to proactively compete for market position while developing deep and lasting relationships,” recalls Robert D. Thomas, current president of NCMA. “He was known for his caring ways and an unassailable presence based on integrity and commitment.  He had a penchant for identifying and mentoring young talent, leading by example.  And others have often remarked how welcome he made people feel.”

While marking NCMA’s 100th anniversary in 2018, Thomas visited with Heslip to reflect on his long career and tenure with the association. “Early on I knew we had to talk turkey to the engineers who designed buildings and also the architects,” said Heslip. “We had to make better contacts. I spent plenty of evenings and weekends inviting the president of the American Institute of Architects (AIA) over for a beer and we’d have talks about what our industry could do for them.”

While head of the Masonry Institute of Michigan, those informal talks paid off. In 1980, Heslip was recognized by the Detroit chapter of the AIA as a “credible, impartial source of information and counsel to the architectural profession”, a role he cherished and carried over into his tenure at the NCMA.

In 1985 Heslip became President of the National Concrete Masonry Association (NCMA) after serving one year as Executive Vice President. During his tenure at NCMA, Heslip spearheaded efforts to improve marketing in the industry; strengthened ties on Capitol Hill; improved communication of the industry’s fire safety message and invested in important research efforts. 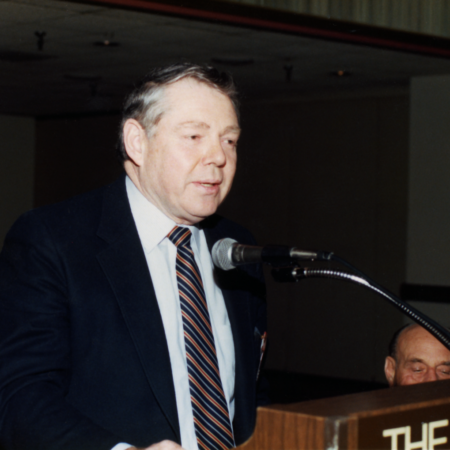 He implemented an industry technical education program: the Certified Consultants of Concrete Masonry (CCCM) with the Construction Specifications Institute (CSI); expanded the industry’s convention and tradeshow to partner with a number of masonry-related organizations and worked closely with the AIA to establish a nationally recognized design awards program.

“It worked out well,” Heslip said. “The awards program was a real winner. What it really did was help focus on the importance of each component to the whole. It helped the brick industry and the block industry and the concrete industry to see that you could work together, satisfying the needs of the architect and his design with his design efforts. It was a big program.”

He personally lectured extensively on masonry subjects at universities throughout the United States, initiated the University Professors Masonry Workshop to advance architectural and engineering education among university professors and authored a number of papers on masonry construction.

Heslip also noted in his 2018 interview that the masonry industry was undergoing dramatic changes in the 1980s. “In the earlier part of the 20th century, empirical design was a way of life, so that whenever an architect or an engineer would get a building commissioned and they wished to build it in masonry, they were using empirical designs. It was an out-of-date system,” Heslip said.

“The competitive industries, the steel industry and the reinforced concrete industries were not empirically designing buildings. They were all rationally designed buildings and proved to be very competitive in terms of cost. A rationally designed building of masonry fit a whole lot of different building types, and we were able to do more for less because we were stretching the fibers of the masonry system to utilize its full characteristics.”

Heslip is also being remembered for his efforts to bring the entire industry together. “I spent a lot of time with the mason contractors. I knew them. I had had experience with them because I was one. I knew how they thought so that came natural to me. We had to get everybody talking on the same merits of the same systems. The brick industry, the reinforced concrete people, the metal building people, the structural steel people. When I hit NCMA, each segment was doing their own thing and trying to outdo each other, and I don’t operate that way. I said, let’s bring it all in. Let’s sort it out and see what kind of a better end result we can come up with.”

Heslip said that, eventually, NCMA was able to get the major players in the masonry industry to sit down and plan programs together. “They had to forget about the competition and start going after their customer. It took a while because the industry traditionally was splintered.”

John’s wife, Marlene, was also part of that inclusiveness, actively participating in NCMA conventions and building a culture within the organization to form personal relationships to better support professional collaboration. 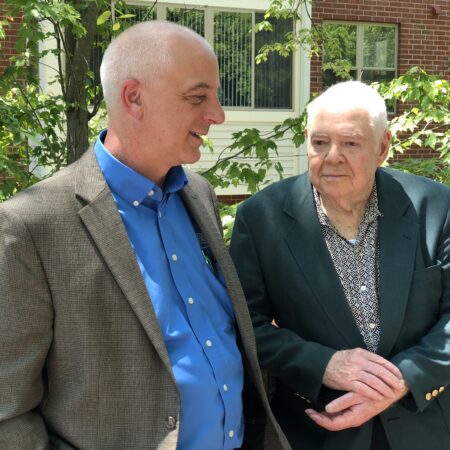 “Many of the leaders of today’s family-owned concrete masonry block producing companies developed their understanding of a broader industry and their eventual professional network by attending NCMA conventions with their family while in their youth,” notes Thomas.

In 1988, Heslip led the effort to establish the Paul and Helen Lenchuk Engineering Student Scholarship Program to support students pursuing a graduate degree in the engineering field. 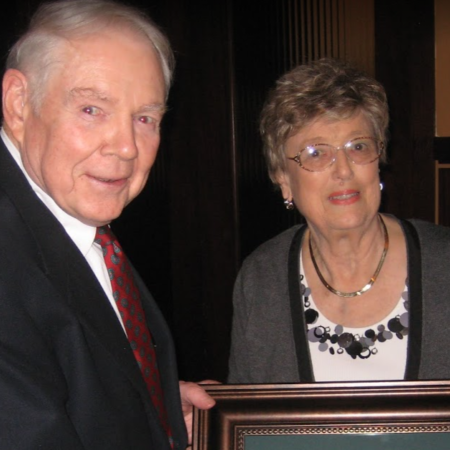 Recognizing the Heslips’ passion for masonry and supporting the personal growth of those within the industry, the NCMA Education and Research Foundation later established the John and Marlene Heslip Scholarship Program for full-time students engaged in the pursuit of an architecture undergraduate or graduate degree.

The purpose of both scholarship programs is to support students pursuing degrees in their respective fields while encouraging innovative design, application, or utilization of manufactured concrete masonry and hardscape products in the built environment.

Heslip was a native of River Rouge, Michigan and studied Engineering at Michigan State University. He served two years in the U. S. Army Corps of Engineers.  After returning home, he worked evenings with a friend who was a mason contractor, and in 1957 started his own masonry business in Saginaw, Michigan.  From 1963 to 1969 Heslip was a masonry product manager for the Huron Cement Division of the National Gypsum Co., in Detroit.

In 1969 Heslip was hired as the first Executive Director of the Masonry Institute of Michigan (MIM) and opened its own office on West Eight Mile Road in Livonia as a branch of the DMCA. He expanded the MIM from a Detroit area operation, to all of Michigan.

Daniel Zechmeister, retiring Executive Director of the Masonry Institute of Michigan, thinks of Heslip as a legend and recalls his move to the NCMA in 1984. “I was intimidated and awestruck by everything the Institute accomplished under the direction of John,” says Zechmeister. “He made my job easier. He laid a foundation that we could build on and was a true pioneer who blazed a path for others to follow.”

During his 15 years with the Institute, John established a solid reputation as an administrator, innovator and authority on masonry construction.  In 1998 the MIM inducted Heslip as an Honorary Member recognized for his outstanding contributions to the masonry industry.

Heslip was active in the American Society of Testing and Materials (ASTM) beginning in 1965.  He served as the Chair of ASTM Committee C-12 on Mortar and Grout for Unit Masonry from 1976-1982.  He was also active on Committees C-1 on Cement, C-15 on Manufactured Masonry Units, and E-6 on Performance of Buildings and served on the ASTM Board of Directors.