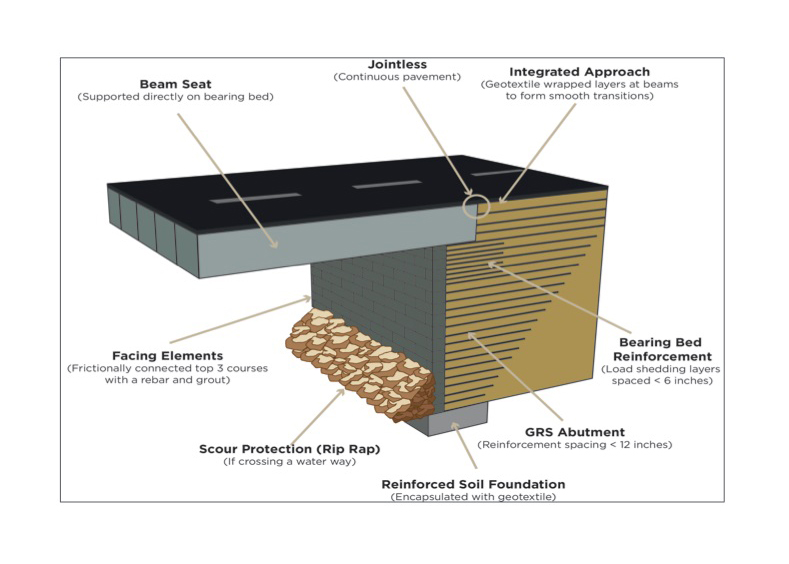 Despite many new bridges and replacement projects, American bridge infrastructure is aging and seriously deficient. Virtually every state in the nation is faced with the task of replacing unsafe bridges that have outlived their design life.

According to the American Road and Transportation Builders Association, there are nearly 204 million daily crossings on 58,495 structurally deteriorating U.S. bridges in need of repair. By 2023, one in ten bridges will be 65 years or older, despite an average design life of 50 years.

The replacement cost of spent bridges nationwide is estimated to be more than $75 billion, reports Transportation for America. States are addressing costly bridge replacement projects as best they can.

The Geosynthetic Reinforced Soil Integrated Bridge System (GRS-IBS) is a fairly new and innovative bridge design developed by the Federal Highway Administration (FHWA). GRS-IBS has emerged as a cost-effective solution for single-span bridge construction, one that is relatively quick to construct.

Rather than relying on a conventional bridge support system of piles beneath the bridge, GRS-IBS uses alternating layers of compacted granular fill with layers of geotextile reinforcement. Concrete masonry units (CMUs) or segmental retaining wall (SRW) systems and materials offer durable and attractive facing to the reinforced bridge abutments. There is no need to pour concrete footings or other concrete components, which can add time to a project. Eliminating forms, rebar and curing all help speed up construction. In place of driven piles and poured concrete, the bridge structure is built directly on a geosynthetic reinforced subsoil mass.

In some instances, GRS-IBS can be used for repair and rehabilitation of existing 7bridge structures. Existing bridge abutment structures can remain in place and contribute additional stability to the newer system. The existing foundations can also play a role as scour protection for the new abutments.

The abutments for the GRS-IBS are constructed on top of the subsoil mass by compacting granular backfill in thin layers and alternating it with closely spaced, thin layers of geosynthetic reinforcement. The geosynthetic reinforcement layers are placed 12 inches (0.31 m) or less apart, according to the FHWA, but 8 inches (0.20 m) is the most common separation. At a minimum, there should be five layers of geosynthetic at the bearing base.

Backfill and geosynthetic reinforcement together create a substructure that holds itself up. That means facing blocks are not burdened with the need to hold back the large mass of soil. The facing element is not a structural component of the system and serves only as a form for compaction and an attractive façade that protects the granular fill from weathering. According to FHWA reports, the system only requires friction between units to connect the modular block face to the backup reinforcements. That differentiates this system from most mechanically stabilized earth structures. In this system, the geosynthetic is extended to the face wall and the two securely tied together through friction.

Several types of CMU are commonly used as facing materials in this system. Solid-face, hollow-core and corner block in standard dimensions are most often recommended. There are also a number of SRW block configurations ideally suited to the GRS-IBS.

Backfill should be crushed, hard and durable particles and fragments of gravel and free of organic material. Specifying the correct backfill is important, as it is a major structural component of the abutment. It must be compacted to a minimum 95 percent of maximum dry density of a standard proctor. Locally available aggregates meeting material specifications are the most cost-effective choice for GRS construction.

Geosynthetic materials are available in various strengths for abutment construction. GRS-IBS typically use a biaxial woven polypropylene geotextile. It is attractive due to its favorable cost, ease of installation and compatibility with the connection between block facing and the GRS mass, reports FHWA.

Once the GRS concept was introduced for use in bridges, it immediately caught the attention of states faced with the most pressing bridge deterioration problems. One of the system’s advantages is its flexible design approach. In the event of unforeseen site conditions or bad weather, GRS-IBS can be successfully modified in the field.

Other advantages stem from working with readily available materials and equipment, making these bridges faster to build. As a result, there are shorter travel disruptions and increased worker productivity and safety.

Concrete masonry units and segmental retaining wall systems contribute to the cost savings for these bridge projects: The materials are easy to transport, can be custom manufactured, are easily placed without heavy equipment, and locally produced.

The integrated bridge system component of the bridge construction blends the roadway into the superstructure of the bridge and support. This alleviates the typical bump at end crossings, where the bridge meets the road. The bump results from differential settling of the road. The bridge portion itself generally does not settle much. But in standard bridges, as time passes and roads settle, the bump is created. With the GRS-IBS this situation is avoided because the road approach slab, the abutment and the bridge beams are meshed together and operate as a single monolithic structure. The result is that bridge and road settle together.

There are 600,000 bridges in the United States. Three-fourths of those could use GRS-IBS technology. States facing major amounts of bridge reconstruction are enticed by the economics of GRB-IBS. In addition to efficiencies in time and materials, the system can be installed at significantly lower construction costs. Savings of 25 percent to 60 percent have been reported in the existing projects and can generally be expected. There are few environmental impacts, thus this is a favored sustainable bridge construction approach with little in the way of maintenance required.

How can SRWs be used in Residential Applications?