Manufactured Stone Veneer one of top projects in 2021 Cost vs. Value Study

In this annual study of return on investment for remodeling projects, MSV again tops 90% return.

The return on investment for installing manufactured stone veneer (MSV) on the exterior of a home is 92.1 percent according to the recently released 2021 Cost vs. Value report from Remodeling Magazine (published by Zonda). This puts MSV as the second highest return on investment of the projects studied, and one of only two to return more than 90 percent of the cost of the project.

Manufactured stone veneer’s 92 percent cost vs. value return is the highest of all cladding projects in the study. Fiber-cement siding replacement was valued at 69.4 percent, while vinyl siding replacement came in at 68.3 percent. 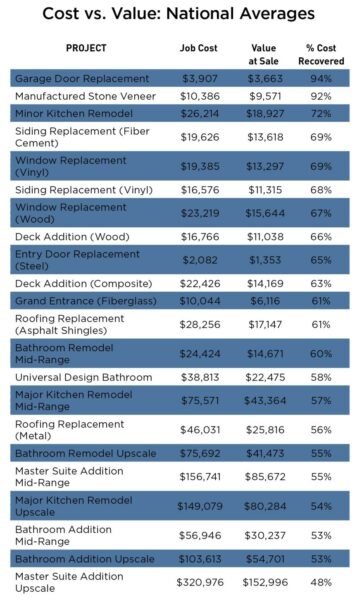 “’Curb appeal’ and ‘first impressions’ are strong concepts in real estate because they have a big impact on how much money prospective home buyers are willing to pay for a home,” the report says.

“As in years past, the national averages for exterior replacements outperformed those of larger discretionary remodeling projects. Manufactured stone veneer this year eclipsed the Garage Door project for the first time as the project with the highest cost recouped,” the report says. It further notes that 11 of the top 12 projects with the highest ROI were exterior improvements.

Manufactured stone veneer has been included in the annual study since 2015. This project has had an average 93.4 percent return over the past seven years.

“Since MSV’s inclusion in the annual study, it has consistently ranked in the top projects, and this year is no exception,” said Chris Hines of Boral, Chair of NCMA’s Manufactured Stone Veneer Committee. “The 2021 report continues to reinforce that MSV is a great investment for homeowners to improve curb appeal and increase home value.”

“NCMA’s MSV Committee has been instrumental in securing MSV’s inclusion in the study, and year-over-year results show the value of this project. While this study is focused on residential remodeling, MSV also provides value also for new construction across all categories – from residential to commercial to institutional,” Hines continued. 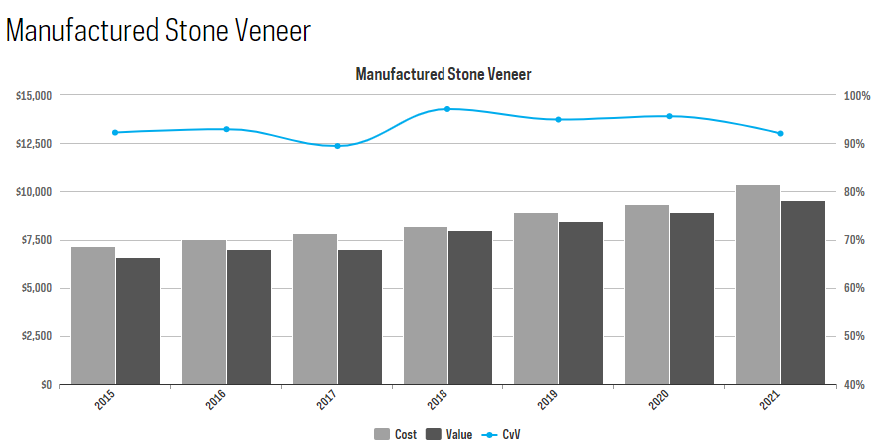 Across the projects in the study, the value-over-cost ratio decreased by 3.7 percent from 2020 to 2021. As noted in the report, this is primarily been impacted by rising material costs due to supply-chain disruptions. While the ROI for MSV has decreased by a similar amount in the same period, it remains a sound investment for homeowners to improve the value of their home. 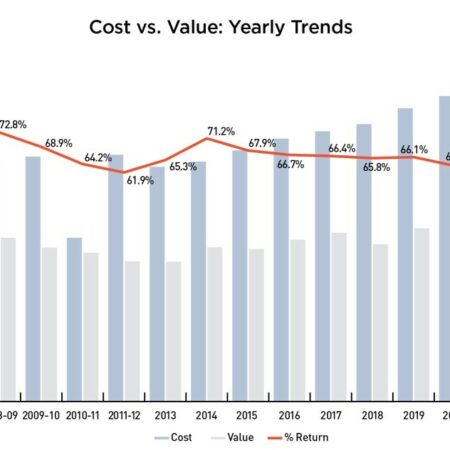 In addition to national averages, the study also looks at cost vs. value across nine geographic regions of the U.S. In two of these regions – South Atlantic (DE, MD, VA, WV, NC, SC, GA, and FL) and West North Central (ND, SD, NB, KS, MN, IA, MO) – MSV is the highest ranking project studied. Similar to the national average, MSV is ranked second in the other geographic regions.

Manufactured Stone Veneer is #1 in Remodeling’s 2020 Cost vs. Value Report